There is a volcano looming over the eastern Congolese city of Goma called Mt. Nyiragongo. It sends off smoke and steam and ash that make Goma’s residents spit black, and its top glows pink in the nighttime sky. Every decade or two Nyiragongo erupts—not a blow-your-top-off explosion, like the famous volcanoes of Krakatoa or St. Helens or Pinatubo; Nyiragongo’s pressure rises gradually until lava bursts through the mountain’s sides, sending molten rivers into the city. The last major eruption was in 2002, and when the lava hardened it left a winding path of black, jagged rock all the way to the shores of Lake Kivu, where Goma ends, like a road built by the devil himself.

The lava buried houses and offices and schools, bisected soccer fields, roads, and an airport runway. And yet, a few weeks after the eruption, people began moving back to rebuild. Goma has been a center of trade for centuries—a polyglot crossroads for buyers and sellers of fish, food, and, most recently, weapons and minerals. Nearly a million people live there now, making a life in Nyiragongo’s shadow. But the city—despite its new hotels and restaurants and schools—retains a feeling of impermanence. There are reminders everywhere—in the lava-rock walls and the shimmering pumice dust that hangs in the air during the dry season—that something menacing sits just on the outskirts of town, always threatening to invade.

Living through the last 20 years of eastern Congo’s history has been like living beside a volcano: unstable, unpredictable, and occasionally violent, sustained by the shimmering hope that a period of peace has come, only to have that hope dashed.

Congo’s east is about the size of Italy, pressed against Uganda, Rwanda and Burundi, right in the heart of central Africa. War in Congo officially ended in 2003, seven years after half a dozen African nations began fighting for control of the enormous country, which is sub-Saharan Africa’s biggest. But in the east the conflict simmers on, erupting every few years in spasms of violence, forcing hundreds of thousands of people to flee their homes and run for their lives. Rebel groups from nearby countries have made the lawless forests of Congo their home, while neighbors like Rwanda repeatedly back Congolese rebellions to promote their own interests in the country. Dozens of self-defense groups—generically known as Mai-Mai—spring up to fight the rebels. They often end up preying on their own communities instead. Crippled by insecurity and instability, the country remains one of the least developed in the world, with a per-capita gross domestic product of only a few hundred dollars per year.

The great irony, of course, is that there are few countries with as much natural wealth as Congo. It boasts some of the world’s richest veins of copper, tin ore, and coltan; it has huge mines of diamonds and gold and half the world’s supply of cobalt, a mineral used in the batteries of electric cars. Its river currents are strong enough to provide electricity for all of Africa, and the country contains some of earth’s most fertile farmland and its second-largest tropical forest.

The wealth has been Congo’s blessing and its curse. In the 1880s Belgium’s King Leopold II took over the land as his personal colony, enslaving and murdering its inhabitants to extract rubber and other industrial materials. The colony then passed into the hands of the Belgian state, which exploited Congo’s gold and copper mines and plantations of coffee and palm oil.

Independence came in 1960, but within six months, Congo’s first prime minister, Patrice Lumumba, was shot and dismembered by Belgian mercenaries. By 1965, the CIA had helped install the anti-communist Joseph Mobutu as president, a position he held for the next 32 years. Under Mobutu the pillaging continued. He built palaces around the country and bought seaside villas around the world, all paid for by money stolen from the state. In 1997, when a rebellion backed by neighboring Rwanda and Uganda forced him to flee, only a single 50-franc note was left in the coffers of Congo’s central bank, or so the story goes.

The first contract the rebels signed—before they’d even won the war—was with a mining company from Hope, Arkansas. It was worth $885 million at the time. Dozens of deals followed with companies from all around the world—Belgium, the United Kingdom, South Africa, Israel, Canada, Lebanon, China, India. 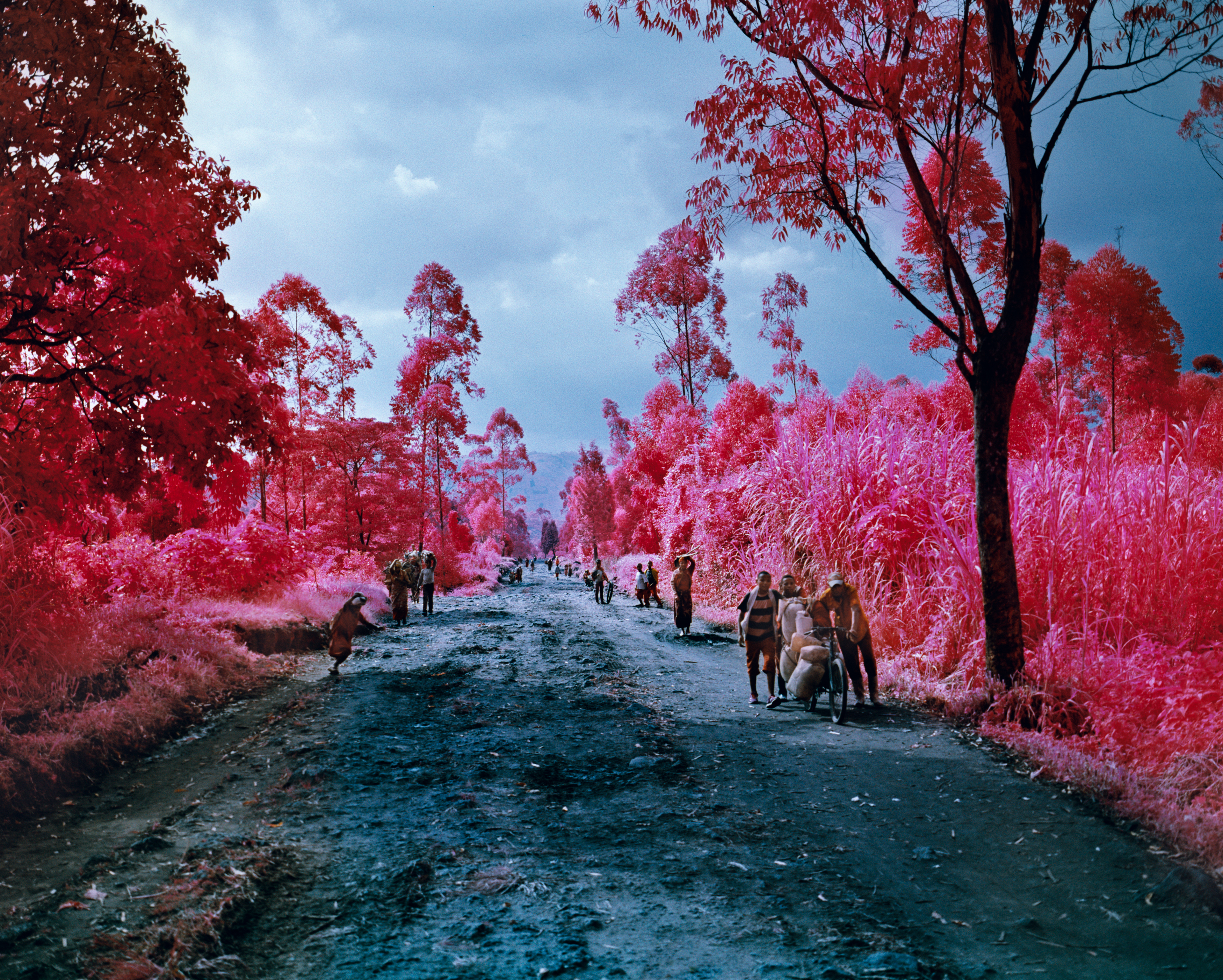 By 1998, Congo’s new president, Laurent-Desire Kabila, mistook all the money from foreign investors to mean that he and his country were finally independent. But when he tried to break from the Rwandan and Ugandan allies that helped put him in power, the two countries invaded again

Battles raged, millions died, but the deals continued. Kabila gave Zimbabwe and Angola diamond mines and oil rights when their armies stepped in to support him. Rwanda and Uganda underwrote their war effort by shipping coltan and gold from eastern Congo. As the fighting intensified, hundreds of thousands of people fled their homes and their land. To survive, many in the east, which was controlled by a Rwandan-backed rebel group, turned to digging for minerals by hand. Coltan, gold, tin ore, wolfram, diamonds. It was a dangerous, deadly way of earning a living; for many Congolese there was no other choice.

In 2001, a bodyguard assassinated Kabila, though to this day no one knows for sure why. His son, Joseph, took over the country. He was only 29. Joseph Kabila signed a peace accord with Rwanda and Uganda in 2003. He led a transitional government and then won the country’s first democratic elections in 40 years in 2006. But the vote didn’t bring peace to the east, where several communities felt excluded by the new government.

Rebel groups grew and split and proliferated like cancer cells. In 2008, one Rwandan-backed rebellion marched all the way to the outskirts of Goma before pulling back. In 2012, another Rwandan-backed group took over the city for 20 days until international political pressure forced them to withdraw.

These days, Goma is headquarters of the world’s largest United Nations peacekeeping force and a huge contingent of Congolese soldiers. But outside the city there are more armed groups than ever—sixty-nine by one count. There are few major battles or clear battle lines. Rebel groups rule various parts of the forests like armed gangs, taxing commerce, sometimes pillaging, killing, or raping civilians. The Congolese soldiers control territory in much the same way: with a monthly salary that rarely touches $100, their weapons are their currency.

In 2015 the number of displaced people in eastern Congo approached two million, almost as high as any time in the last 20 years. For civilians, life is, fundamentally, unstable. You cannot plan for the future. You cannot plant crops or send your children to complete a full school year. You cannot take out loans or stock a shop, or seek judicial succor to redress a wrong. There is always, just outside your city or town or village, a looming threat, menacing, and you need to be prepared to run.

And so many turn to the land beneath them—men, women, sometimes children. They cut down trees in national forests and sell them for timber or charcoal, or poach protected animals, or dig mining shafts. “Artisanal mining”—the widely accepted, sanitized term for an unacceptably dirty job—directly employs a few hundred thousand people in eastern Congo, and indirectly supports millions of others. The ore goes from the diggers in the pits in the forests to the local buyer, to the Congolese middle-class metals trader in big cities like Goma, to foreign companies, mainly from Asia but also from the West, who aggregate and process and sell the tin and gold and coltan to make solders and jewelry and electronics. Along the way, money often ends up in the hands of the army or rebel groups.

While a few army and rebel commanders might get rich from the trade, rebel life is one of subsistence and depravation. A lucky fighter will go into battle wearing cheap Wellington boots on his feet, but more likely he’ll skulk through the forest in flip-flops. While pillaging is a useful form of intimidation, it’s also a sign that the armed groups don’t have the money to pay for what they need.

Poverty is the rule for eastern Congo’s inhabitants, whether they’re armed or not. So is resilience. When the wells are dry, women walk miles for water. Where the few paved roads are potholed, young boys will spend the day filling them with sand, asking for a few francs from passersby. When the judicial system breaks down, local elders take its place. If there are no hospital services for a mother in labor, the community will lead her through childbirth, and help send her to a bigger town or city if there are complications. Where the state has withdrawn, churches provide schools. If the beer from the provincial breweries can’t reach the bush, then fermented banana drinks intoxicate perfectly well for the long equatorial nights. Even at the mines, where the men slide deep under the earth and come out exhausted, there is a buzz of energy.

For years, international advocacy groups have pushed to cut the link between armed groups and the mineral trade. And on paper, so has the Congolese mines ministry. But in reality, the hundreds—perhaps thousands—of small, hand-dug mines in eastern Congo are of little use for the government. An industrial copper mine in Congo’s southeast will produce the same amount of revenue in one day that an artisanal tin mine can produce in a year.

Activists and Congo’s government are at a loss for answers: artisanal mining provides jobs, but not development. And industrial mining in a conflict zone is proving to be nigh on impossible.

There is, in fact, only one industrial mining company currently producing in eastern Congo, a Canadian gold miner called Banro Corporation. In 2011, President Kabila flew all the way from Kinshasa to watch the company pour its first gold bar. It was a shimmering sign of progress and, he hoped, renewed stability. At the time, the price of gold was near record highs and Banro shares on the Toronto Stock Exchange were trading above four dollars.

Almost exactly one year later, on the morning of November 20, 2012, the earth rumbled from the direction of Nyiragongo. Artillery thudded; AK-47s snapped. Once again there were rebels outside Goma’s gates; by mid-morning they’d marched single file all the way to the shores of Lake Kivu, where Goma ends. The bass notes of war sent tremors all the way to the trading floors in Toronto. In one day, Banro’s share price fell more than 17%. It’s never recovered. The stock now trades around 30 cents a share, more than 90% off its high, in spite of Banro opening a second mine and increasing production.

While lower gold prices and management issues mainly explain the persistence of the drop, part of the explanation is that on that November day, Banro’s investors learned what the people of Goma knew too well: in eastern Congo you can ply your trade and make your money, but you do it on borrowed time. Just outside town there is a volcano, pinked-tipped and smoking, looming high into the sky. And when it erupts, you better be ready to run.

Michael J. Kavanagh, YC '00, IR ’07, is a journalist based in Kinshasa and Paris. He began reporting in central Africa's Great Lakes region in 2004, and became the Bloomberg News Congo correspondent in 2009. His work from Congo has also been featured on NPR, BBC, PBS, and in the Economist.