When it comes to building next-gen cruise control, electric carmaker Telsa is way ahead of its rivals—but not in a way they should gloat about.

We’re not talking about founder Elon Musk’s claims that Tesla will offer all the features it needs for a fully self-driving car by the end of the year, claims widely derided in the industry (“The term ‘misled’ works here,” said Cox Automotive publisher Karl Brauer).

No, when it comes to leading the industry in pilot-less driving, we’re referring to the company itself. Musk’s dream of falling asleep at the wheel has been most fully realized on the reformulated Tesla board. What else could you call their comatose reaction to the CEO’s behavior? Would a conscious board allow Musk to overstate the company’s production by 25 percent in another impulsive tweet, especially after his false and misleading tweets last August landed Musk—and the company—in the SEC’s naughty corner?

Nothing seems to disturb their slumber, not even a rate of executive turnover unrivaled in the car industry—or any industry—with more that 50 senior executives leaving during the past two years, including multiple CFOs, engineering chiefs, and HR leaders. Two chief legal officers left in sequence after just two months on the job.

Last year, governance experts complained that the soporific effect of Tesla’s boardroom was likely due to the cozy setting. Several board members have close ties to Musk either through family or business. Board members include his brother Kimbal Musk, a restaurateur and Tesla investor; Antonio Gracias, a long-time investor who also sits on the boards of Musk’s companies Solar City and SpaceX; Brad Buss, a former Solar City insider, another Musk friend; James Murdoch, the controversial former CEO of 21st Century Fox; and financier Steve Jurvetson, who has been on leave from the board for two years due to personal conduct charges.

This fall, the SEC levied modest fines, required Tesla to add two new directors and hire a chairman, and screen Musk’s material tweets about company performance. Musk, of course, outmaneuvered the SEC by nominating Oracle founder and friend-of-Elon Larry Ellison, who is well known for being a champion of CEOs who battled their boards, such as Steve Jobs at Apple and Mark Hurd at HP.

Then Musk demolished any illusion of oversight by the new chairman, Robyn Denholm, an admired technology and financial executive, during a 60 Minutes appearance. Musk ridiculed the SEC (he called the agency the “Short-sellers Enrichmment Commission”) and baldly claimed that he’d decide when, if ever, to subject his erratic tweet storms to a board review. In response, she did nothing—of course—thus reaffirming that Musk was untouchable and the board was powerless to contain him.

On February 19, Musk tweeted those incorrect production numbers for 2019. 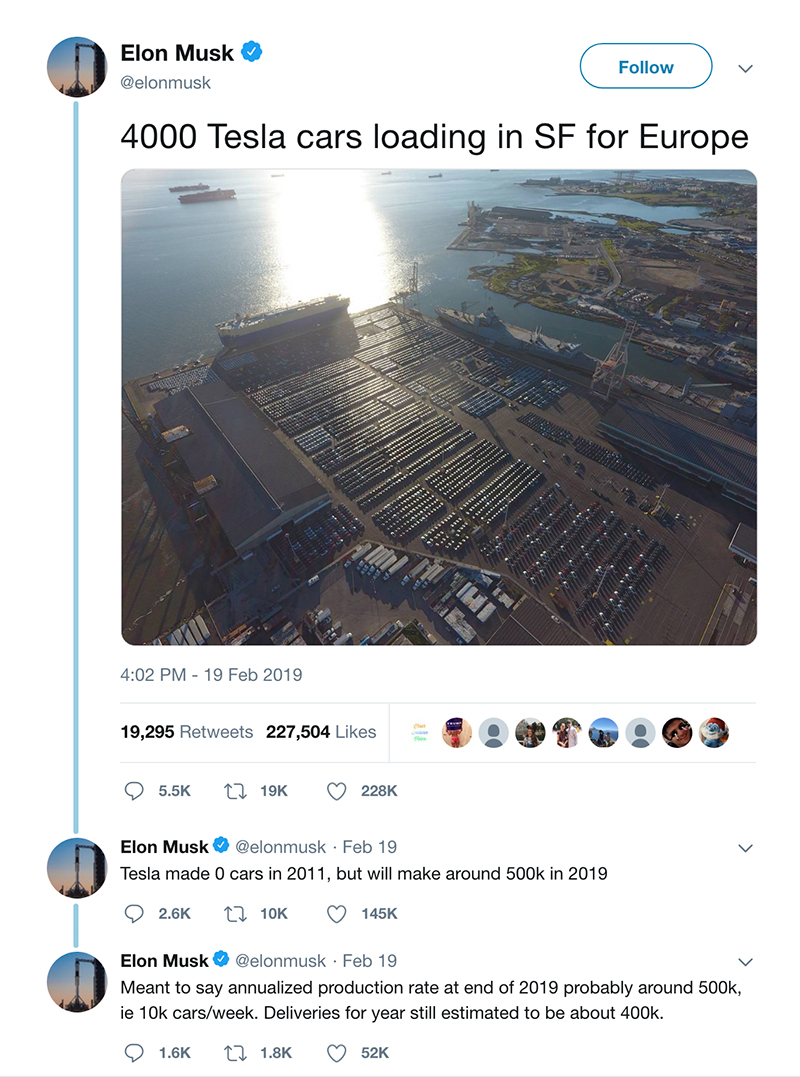 He now has until March 11 to explain to a federal judge in New York why he shouldn’t be held in contempt. Musk’s response has been exactly what you’d expect: He changed his twitter identity to “Elon Tusk,” complained that “the SEC is broken” and blamed the agency—not his actions—for a 4.6% drop in his share price this week.

The SEC is not amused. They could fine him and the company, which is expected, but it could also request that the court find Musk unfit to serve as an officer or a director of a public company as they have done in other cases, ranging from Bank of America’s Ken Lewis to Theranos’ Elizabeth Holmes.

What’s Tesla’s board to do? For starters they should wake up, switch off the cruise control and brace for impact:

Stop Poking the Bear. Require board filtering for Musk’s tweets to halt his insulting the court, the SEC, and analysts, and journalists.

Speak Truth to Power. Put two truly independent directors with courage and experience on this board of cronies and cowards.

Prepare for a CEO Succession. The probability of Musk being banned is genuine. They must consider alternative roles for him.

Find Musk An Advisor or Coach he respects, who has also been a business builder who can corral this erratic behavior.  The late Andy Grove of Intel would have been ideal.

Roll up Musk’s Factory-Floor Sleeping Bag and stop pretending he can be the full-time CEO of four different businesses.

Yes, Musk is a genius. But so were Digital Equipment’s Ken Olsen, Wang Labs’ An Wang and Polaroid’s Ed Land. I knew all three of these monarchs. Like Musk, they were pioneers leading revolutionary scientific development, industry disruption, and progressive work communities. And like Musk, they were dogmatic about technology and built models of leadership where the organizational chart was a solar system revolving around them and their delusions of indispensability. It was this behavior that laid the seeds of destruction for their once great enterprises.

If those examples don’t shake Musk and his board from slumber, perhaps they should recall the story of Nikola Tesla, the brilliant engineer/physicist who Musk named his company after. Tesla, as everyone knows, invented alternating currents, remote controls, wireless communications and other technologies for GE and Westinghouse. He was another quirky entrepreneur who claimed to never sleep more than two hours a night.

Less well remembered: His businesses failed. He died alone as a hermit found days later by the maid in a New York hotel room.