Q: You co-authored a working paper, “The Price Ain’t Right? Hospital Prices and Health Spending on the Privately Insured,” that analyzed an enormous set of data that had never been publically available. What was the data and how did you get it?

The negotiated transaction prices paid by private insurance companies to healthcare providers have been treated as commercially sensitive data and therefore have been largely unavailable to researchers. But three of the five largest insurers in the nation, Aetna, United, and Humana, made a database of health insurance claims data available for research through a nonprofit called the Healthcare Cost Institute.

The data covers 2007 to 2011 and more than 88 million unique individuals, or nearly one in three individuals in the U.S. with private health insurance. While it is anonymized, the data are incredibly granular. Basically, we have claims-level data for 1% of GDP each year.

Q: What do we know about why healthcare in the U.S. is so expensive? Where has the data for that come from in the past?

There’s a lot we haven’t known about why healthcare in the U.S. is so expensive. In part, that’s because almost everything we knew came from analysis of Medicare data. Medicare covers about 16% of the population, primarily people over 65. The world of the privately insured has been a big black box, but about 60% of the country gets their coverage from private insurers and they are under 65.

Part of this work has been asking to what extent our understanding of health spending borne from the analysis of the Medicare population is generalizable to the privately insured. This is a hugely important question for policy because we’ve effectively assumed that the patterns in health spending for the two populations— Medicare recipients and the privately insured—are similar so one policy will address both. 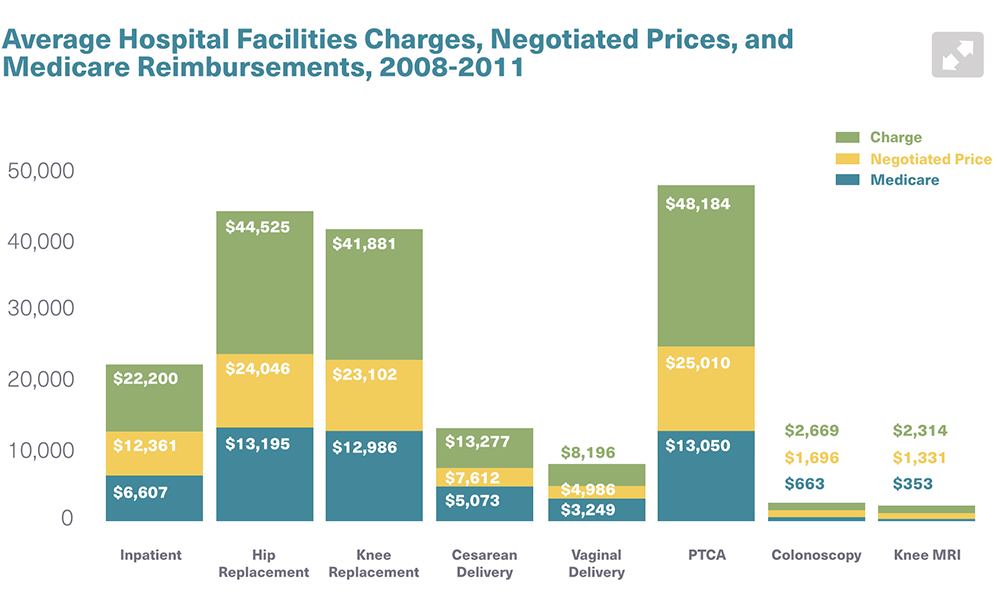 Q: What did you find?

On the private side, quantities vary just as they do on the public side, but prices vary as well—they’re not set by a regulator. We find that while quantity matters some, price plays an incredibly large role in driving healthcare spending for the privately insured.

This tells us that the avenues to target healthcare spending probably differ for the Medicare population and the privately insured. For Medicare, the goal should be to reduce excess quantity. On the private side, we don’t want to see excess care, but we really have to target price. 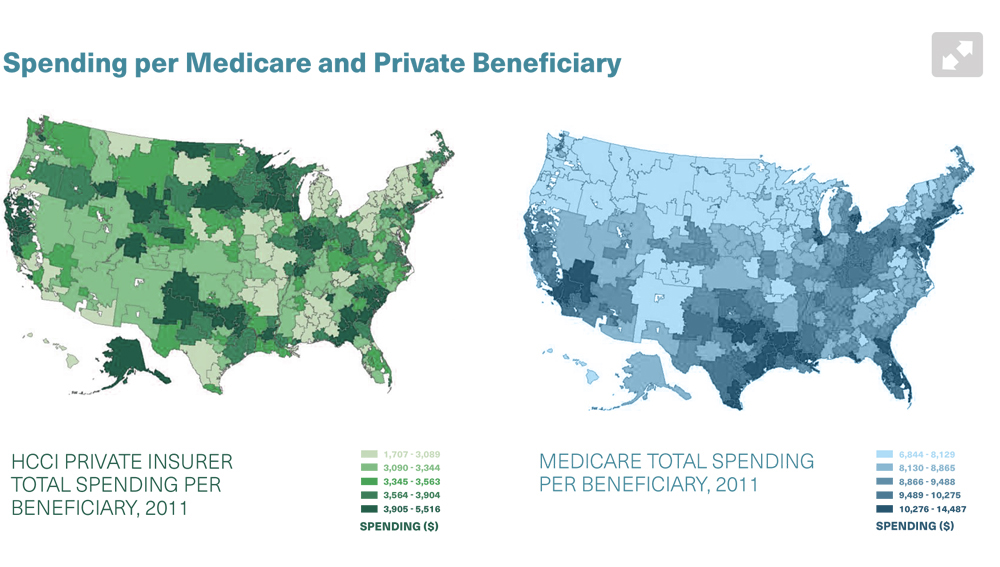 Q: The research also examines the significant variation in prices charged to privately insured patients. Could you explain those findings?

We looked at seven different procedures and found that prices vary tremendously across the U.S. and within geographic areas. Across the country, the price of a knee replacement can vary by up to a factor of 17—the most expensive hospital is 17 times as expensive as the least expensive hospital. Within geographic areas, that can be, for knee replacements, up to a factor of eight. Lower-limb MRIs, when you set aside the reading of the MRI, don’t have much quality variation, yet, as an example, the most expensive hospital in Miami is charging nine times as much for an MRI as the cheapest provider.

Q: Could a hospital’s reputation for quality drive the price variations?

We hoped to find that higher-quality hospitals have higher prices, potentially indicating functioning markets. We found a very small relationship between hospitals’ quality and their prices.

There is a negative return to being low quality. The worst-performing quartile on quality scores have prices about 3% lower than an average-quality hospital. At the other end, hospitals ranked highly by U.S. News and World Report are about 13% more expensive than other hospitals. But it’s a very small relationship considering the scale of the price variation we see. The factor that explains most of the variation is hospital market power.

Why are some hospitals able to charge 17 times more than other hospitals? Why can one provider charge 9 times what another does within a city for the exact same thing? Because the markets are not functioning effectively.

When hospitals merge, they have the opportunity to charge incredibly high prices. Monopoly hospitals can extract higher prices when it comes to negotiations with private insurers. If you are the only provider in the area, you have the chance to get much, much higher prices than if you were facing meaningful competition. The advantage is still there in duopoly or triopoly markets.

We saw about 100 hospital mergers last year; that’s the highest that we’ve seen in the last 15 years, but deals have been going on year after year. We’ve got to look at these mergers with a lot more scrutiny. We’ve got to look a lot more closely at how healthcare providers price their services and how that affects individual families and the wider economy.

Q: Are there difference between nonprofit and for-profit hospitals in terms of their prices?

We found, consistent with the wider literature, that not-for-profits behave identically to for-profits. That is, their prices are equally high, and they are also likely to charge higher prices when they have monopolies.

Given that nonprofit hospitals receive $30 billion annually in subsidies in the form of tax exemption, I think we have to ask tough questions about whether or not we should be giving not-for-profit status to these large hospitals.

Q: Where does the additional money paid to providers go?

It’s a great question, and we don’t know. My instinct is that it goes to the leadership of these hospitals in the form of higher pay and it gets reinvested into the facility, some of which goes to better patient care, some of which goes toward shinier buildings and fancier technology with unclear benefits for patients. That’s something that I’m looking at now.

Q: What are the policy implications of this research?

This study tells us that insurance premiums are so high because healthcare provider prices are incredibly high. The way to rein in the cost of healthcare services is by targeting the massive variation in providers’ prices. We can do that by making prices more transparent, making these markets more dynamic, and really blunting the monopoly power that a lot of large healthcare providers have, which has allowed them to raise prices.

In making these changes, there are certainly roles for insurance companies, employers, and patients, but frankly, the largest role is probably for the federal government. Right now, for a hospital to get paid by Medicare it has to report quality data. I think hospitals should also be required to report their prices.

And critically, we need antitrust enforcement. We have to stop some of the extraordinary mergers that have been occurring with rapidly increasing frequency over the last 10 to 15 years. That’s what is giving hospitals more market power and allowing them to extract higher prices.

Q: How much of a political challenge would that be?

Healthcare is one of the most heavily lobbied industries in America. The hospital industry itself is 8% of GDP, so there would be a lot of pushback. But when we compare the pushback to the pain that high healthcare costs are inflicting on all of us, the impetus for action is pretty clear.

Q: What is the role for business?

Part of what’s so interesting in healthcare right now is that a $2.7 trillion industry that’s rife with inefficiency leaves tremendous space for innovators to come in and disrupt the status quo. We are starting to see companies do that.

Since business pays a portion of the insurance premiums for millions of employees, CEOs are aware that healthcare costs are an enormous strain. For manufacturing companies, it can be the largest input price to the cost of production.

Some companies are doing an amazing job seeking creative ways to reduce healthcare costs. I know of one firm that’s actually paying patients to choose a lower-price MRI. It’s the same quality. The patient is paid $500. The company still pays less overall. Everybody wins.

Or, if I’m an employee in a Chicago office, perhaps my company will allow me to fly to the Mayo Clinic or to MD Anderson in Texas where, potentially, I can get care that is both cheaper and higher quality than I can get locally.

If prices were more transparent, that would help patients be effective choosers. Increasing patients’ sensitivity to price and quality and their willingness to travel further to get better and lower cost care could have an impact. But right now, we have a very complicated market with almost no information. The federal government has the most power to effect change.

Q: Does this research offer any insight on where U.S. healthcare fits globally?

The U.S. is an outlier because it is one of the only countries where healthcare prices are market determined. In most countries, the prices are regulated. One of the challenging questions in healthcare is whether the ways that healthcare differs from traditional markets allow prices to be set through negotiation. I think the jury is still out.

Ultimately, if making these markets more transparent and increasing competition doesn’t rein in price, then we need to think about whether healthcare is so different from other sectors of the economy that it requires something like price regulation.

Q: What are the next steps for research?

We had the opportunity to analyze data at a scale that nobody had done before. We examined nearly a third of the privately insured patients in the U.S., but we need more data. For example, we don’t have data from Blue Cross Blue Shield. I’d love to see how they compare. I’d like to make a plea to the folks who read this interview: if you work for an insurance company, please make your data public. We tackle big challenges by getting more and better information. More data will give us a richer and more nuanced picture of healthcare spending in the United States.

Going forward, I’m also doing some really interesting work with my Yale colleague Fiona Scott Morton where we’re actually going to work with a large insurer to see if we can present information and structure monetary and non-monetary incentives in a way to help patients make better choices—choose better care at a lower price. It’s putting the evidence from this paper into action and seeing if we can really begin to come up with scalable solutions. I’m excited to see what we find.

What to read next in Markets